The Luck of Reading The Luck Uglies: Review of an Adventurous Debut Novel by Paul Durham

There are books we all hope to find that do more than simply tell a story. These books take us with them. They take us with them on the adventure and we feel like we know the world around us when we go. And these are rare treasures we keep and pass along. Author Paul Durham’s first MG/YA novel, The Luck Uglies, is one of those rare books.

An adventure and an introduction to Village Drowning and all its inhabitants, The Luck Uglies has a timeless feel, as if it might just as believably come from the hidden library in a castle as from the work of a modern writer.  It is both clever, never underestimating the intelligence of the young reader, and exciting, never forgetting that everyone loves a good adventure. 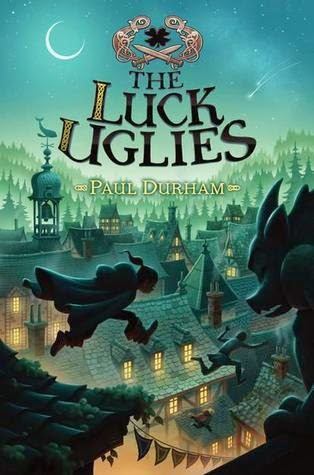 We were able to catch Paul Durham in the midst of all the excitement of The Luck Uglies. While there are heaps of questions I could list, like Rye O'Chanter, we will have to be content with a few at a time:

1. Who are a few of your favorite authors and/or books (few people have just one!) that might have inspired some of your writing?

There are so many great middle grade authors and books it is indeed difficult to narrow it down, but I always find myself coming back to the same examples.
The Chronicles of Prydain series by Lloyd Alexander has stayed with me ever since I was a child. I’ve reread the series twice as an adult and it still holds up as compelling reading. Its five books tell a story that is timeless and epic in scope, and yet the storytelling remains intimate and accessible.
A more contemporary favorite is The Graveyard Book by Neil Gaiman. This was one of those books that just knocked me over when I read it because it was so good. It's hard to call it a children's book because, really, it's for everybody. It is exactly the type of book that inspires me to be a better writer.
•
2. You mention that you started telling the story to your kids. Who were your first characters?
Rye O'Chanter was the very first character to make it onto the page. This seems so fitting because she was heavily inspired by my own daughter, who prompted my to write The Luck Uglies in the first place. Of course, Rye needed cohorts, so her little sister Lottie and her best friends, Folly and Quinn, weren't far behind.
•
3. There is such a rich Village Drowning history the reader can sense. Can you give us a few things about the place that aren't in the book?
That's such a great question--I often think of Village Drowning as its own "character." Like any character, there are things about it that even I haven't discovered yet, but here are two tidbits I can share. Beneath the streets of the village, there is a place even older than the Spoke that the link rats call home. Also, in addition to the bogs and river, Drowning is bordered by a brackish body of water called the Great Eel Pond. Enormous culverts drain water from the pond under, rather than over, the village. Needless to say, Drowning remains damp even under the best of circumstances.
•
4. Is this the beginning of a journey for Rye? Are there more Luck Ugly book coming?
Yes, I'm happy to report that this is just the start of Rye's journey. The Luck Uglies is a trilogy, with more books to come in spring 2015 and 2016. I'm finishing Book 2 right now.

Durham weaves a tale that truly brings you into Rye O’Chanter’s strange and mysterious world. The story makes you wish the book would not end so you can uncover more secrets that promise to be hidden there.