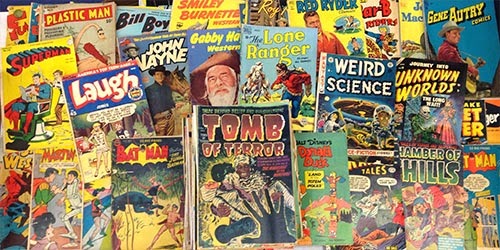 I’ve read a lot of comics in my time, and I have the long boxes to prove it. I’ve also read quite a few middle grade superhero novels, and it’s a sub genre that has more depth than you might think. For non-comic fans, it’s easy to dismiss such books as adolescent power fantasies, but when you do that you miss out on some excellent stories.

Comics are the mainstream. The superheroes that first took to the skies in four-color glory have never been more powerful. Movies, TV, and video games based on superheroes are bigger than Giant-Man, and generating a fortune that even Lex Luthor would envy. It’s only natural that there’d be room for novels in that media-mix as well. And what I’ve found in those novels are stories with a range of ideas and styles.

Yup. Range. Or maybe a more accurate description would be tone. See, here’s the thing with superhero stories – because the format is so well known, clever authors can use your expectations against you. They can throw curve balls, twist tropes, and stretch your imagination.

The recent success of the Marvel Cinema Universe, or MCU to the geeks out there (my peeps!), has shown how this works. Yes, the Marvel movies are based on comic books, but the story geniuses behind them know that comics are a meta-format that can carry the tropes of other genres on it’s super-strong, gamma-irradiated shoulders. The Avengers can be the big, earth-shattering event movie, but Captain America: The Winter Soldier can be a 70’s political thriller, while the Guardians of the Galaxy can be a space-opera-crime-romp. The genre subverts others genres to its will the way Superman bends steel with his bare hands.

Back to middle grade novels. Here are a few of my recent faves that use the background of comics to tell universal tales.

Geeks, Girls and Secret Identities – Mike Jung’s take on superheroes contains an awesome twist (that I will not spoil here). Jung delivers a well rounded cast of diverse characters (by gender, race and socio-economic circumstance), that drive a lively, hilarious adventure. With giant robots, and a superhero fan club that manages to save the day.

Powerless – Matthew Cody’s Powerless is a deeper, more character driven mystery. There are plenty of super powers on display throughout, coupled with perilous action, but the narrative has a more realistic tone. It hit me like vintage 70’s Spielberg, or the movie Super 8. It’s the first of a trilogy. The second book, Super, has a fantastic twist on the first, but the same great tone. The third, Villainous, comes out later this summer, and is something to look forward to.

Sidekicked – This book, by John David Anderson, really digs into the sidekick-hero relationship through the eyes of a sidekick whose hero has thrown in the towel. It touches on the nature of right and wrong, adds a dash of romance, and a heap of Whedon-esque Scooby Gang fun. Anderson’s latest, Minion, takes a look at this same world through the eyes of a villainous sidekick and it dropped yesterday. I can’t wait to get my gauntleted hands on it.

These are just a handful of examples of the super books out there for middle grade readers. I love how each one takes such a different angle on the genre while delivering excellent stories that keep kids looking for the next one. Because that’s a another built in comic-trope; there’s got to be a next issue!

Got any favorites of your own? I’d love to read them too, so tell me about them in the comments.