Must Read Mid-Grade for 2015: Summer Edition by Caroline Starr Rose 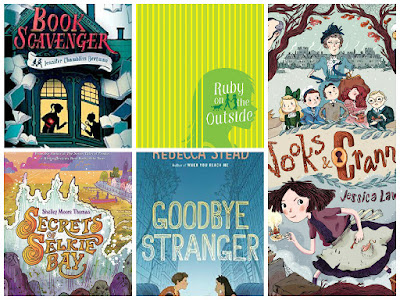 Sweet, shy Tabitha Crum, the neglected only child of two parents straight out of a Roald Dahl book, doesn’t have a friend in the world—except for her pet mouse, Pemberley, whom she loves dearly. But on the day she receives one of six invitations to the country estate of wealthy Countess Camilla DeMoss, her life changes forever.

Upon the children’s arrival at the sprawling, possibly haunted mansion, the countess reveals that each of the six children is adopted, and that one of them is her long-lost grandchild—and heir to a large fortune. Not only that, but the countess plans to keep and raise her grandchild, regardless of what the adoptive parents have to say about it.

Then the children beginning disappearing, one by one. So Tabitha takes a cue from her favorite detective novels and, with Pemberley by her side, attempts to solve the case and rescue the other children…who just might be her first real friends.

For twelve-year-old Emily, the best thing about moving to San Francisco is that it’s the home city of her literary idol: Garrison Griswold, book publisher and creator of the online sensation Book Scavenger (a game where books are hidden in cities all over the country and clues to find them are revealed through puzzles). Upon her arrival, however, Emily learns that Griswold has been attacked and is now in a coma, and no one knows anything about the epic new game he had been poised to launch. Then Emily and her new friend James discover an odd book, which they come to believe is from Griswold himself, and might contain the only copy of his mysterious new game.

Racing against time, Emily and James rush from clue to clue, desperate to figure out the secret at the heart of Griswold’s new game—before those who attacked Griswold come after them too.

Ruby’s mom is in prison, and to tell anyone the truth is to risk true friendship in this novel from the author of The Summer Before Boys that accurately and sensitively addresses a subject too often overlooked.

Eleven-year-old Ruby Danes is about to start middle school, and only her aunt knows her deepest, darkest, most secret secret: her mother is in prison.

Then Margalit Tipps moves into Ruby’s condo complex, and the two immediately hit it off. Ruby thinks she’s found her first true-blue friend—but can she tell Margalit the truth about her mom? Maybe not. Because it turns out that Margalit’s family history seems closely connected to the very event that put her mother in prison, and if Ruby comes clean, she could lose everything she cares about most.

In their present-day tourist trap of an Irish seaside town, famed for its supposed involvement with selkies in the past, three sisters are faced with the sudden disappearance of their mother. Crushed by the loss, their father is struggling to carry on. To make matters worse, there are rumors afloat in the village that their mother herself is a selkie who has now shed her human form and gone back to sea. As Cordie Sullivan, the oldest daughter, tries to learn more about her mother's vanishing, she must find the strength to help her family move ahead, even as she discovers an increasing number of clues that point to a hidden island off the coast-a mythical kingdom of the selkies.

This brilliant novel by Newbery Medal winner Rebecca Stead explores multiple perspectives on the bonds and limits of friendship.

Bridge is an accident survivor who’s wondering why she’s still alive. Emily has new curves and an almost-boyfriend who wants a certain kind of picture. Tabitha sees through everybody’s games—or so she tells the world. The three girls are best friends with one rule: No fighting. Can it get them through seventh grade?

This year everything is different for Sherm Russo as he gets to know Bridge Barsamian. What does it mean to fall for a girl—as a friend?

On Valentine’s Day, an unnamed high school girl struggles with a betrayal. How long can she hide in plain sight?

Each memorable character navigates the challenges of love and change in this captivating novel.

What summer releases are you looking forward to?

* I'm reading this one right this second. :)
** Because there can never be enough selkie stories in the world!
*** Author Liesl Shurtliff was kind enough to mail me her ARC of this new book. Like all of Stead's works, every word counts.