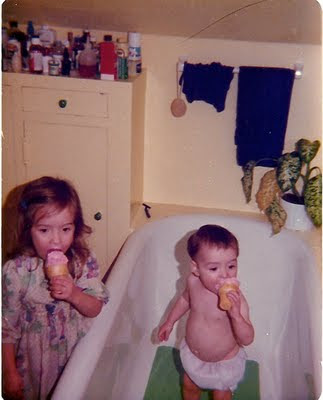 That's my big sister Em and I when I was ... very little. I guess my parents figured: "Baby Matthew wants an ice cream cone? Sure. Slap him in a rubber diaper and put him in the bath tub."

Then I guess they left the room.

Who knows? I don't, but I want to talk about parents (or the lack thereof) in the books we read and write. I'm sure most of you have noticed that most MG and YA literature consists of protagonists whose parents are either dead, missing, abusive, distant, incarcerated, abducted by aliens, or sometimes just plain not even mentioned.

I'm not saying it doesn't make sense. I mean these books are about young people, and young people are much more interesting if they can get into adventures. It's hard to have adventures if mom is going to start blowing up your phone when curfew rolls around. But lately I've been thinking about why this is. I mean personally, it feels natural to write about young people with parents who are out of the picture. All my writing is at least partially autobiographical, and my mom died when I was 11 years old. My dad was out of my life even a year before that, for reasons we don't need to get into. Is that really why I write stories the way I do, though?

I'm trying to think of a scenario in which normal, healthy, present parents could be a part of a YA or MG novel. I can't think of a single one I've read myself. I think I may have to write one.

Harry Potter has a lot of awesome adults, even an amazing godfather, but Harry's real parents are dead before the first word. Charlie was there in Twilight, and he seemed like a decent dad, but he'd been out of Bella's life for so long he didn't have much authority over her. Another Charlie, from that story about the chocolate factory, had some pretty decent (albeit extremely poor) parents, but it was his grandpa who came along to take part in the story.

What do you guys think? Have you read any children's books lately that had normal, present, healthy parents in them?

If not, do you think there is some other underlying reason behind this phenomenon? Something other, perhaps darker, than just freeing the characters up to go on adventures?
Posted by Matthew MacNish at 8/24/2011