Character Inspiration and a WOLF STORM wolf pack of a giveaway 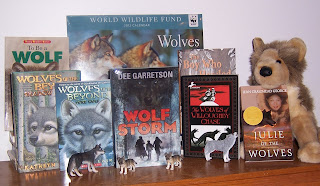 To celebrate the release of WOLF STORM, and because I think wolves are awesome, I’m giving away a giant wolf pack of books and other wolf-related items. A description of it all is near the bottom of this post.
WOLF STORM is about three kid actors involved in the filming of a space opera-type science fiction movie. They are on location in the mountains of Eastern Europe in wintertime, and since the book is an adventure, things begin to go wrong, very wrong.   There are both trained wolves in the story-I had fun researching the trained wolves they used in filming the Narnia movies-and regular wild wolves. The native wolves are extremely unhappy about the presence of strange canines into their territory.  There is also a pug named Mr. Snuggums who provides a little comic relief. Michael, if you are reading this, maybe you can think of one of the comparisons from the discussion in your last post.
Here's the book trailer:
I thought this would be a good post to talk about inspirations for characters, because the main character in this story was inspired by a specific person. I’ve never wanted to write a character that was like me. I’ve lived so long with me,  I’m bored with my personality. I want to write about other types of personalities.  I think most writers do because it’s fun to dream up characters we aren’t.  When I proposed the idea of the book, I knew I wanted to write a story involving movie-making, because I love movies, especially adventure movies. Here was the problem-I have never had a desire to act, don’t know how to act, and would be a terrible actor. 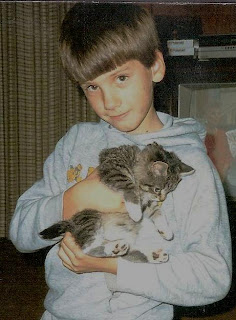 So, given my lack of knowledge of the sort of personality I wanted to write, I had to find a way to get inside the head of that sort of person. My nephew Matt was the perfect choice.  I tried to find a photo of him at fourteen, the same age as my main character, but since I couldn't, this one works. This kitten supposedly followed him home (actually I think he carried it wrapped in a sweatshirt so it wouldn't escape). He told his parents they had to keep the kitten because it would be a good influence at keeping him and sister from "hanging out on street corners and smoking cigarettes." Actual Matt words. They kept the cat.
Anyway, Matt was very talented at imitating people, including teachers behind their backs, who occasionally caught him at it. He was famous in our family for being able to imitate E.T., and he acted in both community and high school theater productions. All in all, he became the model for Stefan. I needed a kid character from regular small town U.S. suddenly thrown into what he thinks will be a dream situation, only to find it turns into something very different. Matt became the go-to person in my head when I wanted to write Stefan’s reactions to things. Of course, like any character, the MC is not identical to the inspiration. His family is totally different from our own. I don’t have pink hair like Stefan’s aunt, for instance.

Matt is now a responsible adult with an adorable son of his own, though I suspect he still does imitations from time to time.
To enter into the giveaway, just comment after this post. If you would like more than one entry, there are ways to increase your chances. To get an extra entry, tweet a link to this, or post a link on Facebook or on your blog and let me know about it here in the comments. If you do both, you’ll get an extra entry for each. Here's a shortened link you can use: http://bit.ly/qbwXeQ If any bloggers out there would like to do a giveaway of a hardcover of WOLF STORM later in September, I’ll have a few more author copies in a few weeks to do that. Just email me at deegarretson at gmail.com
The giveaway includes:
WOLF STORM by Dee Garretson (signed hardcover)
SECRETS JOURNEYS OF JACK LONDON Christopher Golden & Tim Lebron (hardcover-not in picture)
THE BOY WHO HOWLED Tim Power (hardcover)
LONE WOLF Kathryn Lasky, book 1 Wolves of the Beyond (paperback)
SHADOW WOLF Kathryn Lasky, book 2 Wolves of the Beyond (hardcover)
THE WOLVES OF WILLOUGHBY CHASE by Joan Aiken (paperback)
JULIE OF THE WOLVES by Jean Craighead George (paperback)
TO BE A WOLF by Carol Amato (paperback)
A 2012 Wolves Calendar
A stuffed animal Wolf
4 small wolf figures to decorate a desk
Sorry, this is only open to U.S. residents. Leave a comment up until 8:00 P.M. E.T., Monday, September 12th. The winner will be announced on Tuesday, September 13th.
Posted by Project Mayhem at 8/29/2011