I went to see the final Harry Potter movie yesterday (which I loved, minus seeing Baby Harry crying in his crib. Horrible, isn't it? Come on, people! I almost had to leave the theater and run home to my kiddos).
Anyway, there was a scene with the nearly grown-up Harry chasing down a missing diadem, and he has to go ask the Gray Lady where it is. Now, I haven't read the series in years, and before seeing the movie, I couldn't have given you the foggiest idea who said Gray Lady was. But sitting in the movie theater, I recognize her. I had just finished the first draft of my next book and, lo and behold, I have an allusion to a mysterious Gray Lady in there. Coincidence? Possibly. A tricksy subconscious? More likely.

Fortunately, this isn't a big plot point in my story, and the only thing those two gray women have in common are their names. Easily fixable. But I still don't like that feeling of being hijacked by my memory. I want to think my ideas are original, but is that even possible? Even if characters aren't sneaking into our drafts from books we've once read, are there really any original ideas out there?
I remember working on the first draft of Storybound and taking a break
to browse through the middle-grade section of the bookstore. And what did I find? A little book called Inkheart. I nearly cried right there in the aisle, because I hated the thought that someone else had already written about my idea of a girl entering a fantastical book world. And then I discovered the Thursday Next series and heard about Fantasy Baseball and came to the now-obvious revelation that my idea wasn't really all mine to begin with. 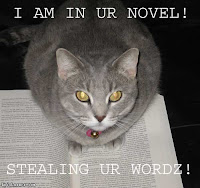 It goes without saying that writers are some of the most voracious readers out there. It's silly to imagine we aren't influenced by what we read. In fact, reading a good book can be a wonderful inspiration, although the annoying proclivity for another author's voice to seep into my writing is why I steer clear of any fiction when I'm working on a new project.
Besides that, how can we really distance ourselves from the stories that have shaped us? Or should we want to? What do you think? Can a story ever be truly original?
Posted by Marissa Burt at 8/08/2011