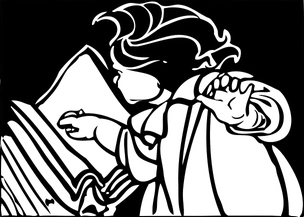 Practical jokes, riddles, pranks and puns: these are all real-life sources of humour which almost always guarantee a few chuckles. Who doesn't love a well-planned prank? (Well, besides the victim, probably.) But translating this humour to the written page doesn't always work. When you're trying to make your reader laugh, it's important to note that just making your characters laugh probably won't do the trick.

Because the characters' experience is, to a certain extent, removed from the reader's experience, you'll often find that readers are laughing when characters aren't. As Dee outlined in her post about Star Wars humour, it's often the situation that's being presented which tickles the objective viewer's funny bone. Think about all those funny home videos you've watched; were the people being filmed laughing along with you? And the way a situation is presented can make a difference as well. Some scenes that would be dull in most authors' hands may be funny in the actual author's book.

Furthermore, humour is incredibly subjective, which is a good thing: this means there's all types of humour being written for all types of readers. For example, there's the wacky, absurd humour featured prominently in Louis Sachar's legendary Wayside School series, and the deadpan humour which Gordon Korman is known for. Judy Blume's Fudge series excels at presenting hilarious situations in a way which the reader can join in and laugh at, too.

Now, for some textual examples!


One of my favourite recent middle-grades series is Trenton Lee Stewart's The Mysterious Benedict Society trilogy. His books are full of adventure, friendship and plenty of humour:


(p. 160) Constance, in the meantime, was looking disgusted. "This is a terrible spyglass, Kate. It makes everything look far away."
Kate turned the spyglass around and handed it back to her.

One single sentence is all that's needed to show the mistake Constance has made, and to gently poke fun at her character while contrasting it with the dialogue she's just spoken. This is a great example of simple yet effective contrasting humour.


Tom Angleberger's The Secret of the Fortune Wookie is the third book in his Origama Yoda series, and it features many perspectives from different middle-grade students in the story. This allows us to experience many different POVs, including Murky Kahleel's, who happens to have the type of exuberant personality which translates excellently to writing:


(p. 91) it was the Rug-Boni!!!!!!!!
"Stooky!" I shouted. in case you dont know what a Rug-boni is do you know what a ZAMboni is? a Zamboni is this jacked-up thing they drive around on the ice at a hockey game to make the ice icier or something. Ben told me about it. he watches hockey on TV and used to go see the Roanoke hockey team play before they stopped.
well a Rug-boni is like a Zamboni but for carpets instead of ice!
its like a vacuum cleaner that you ride on!!!!
the only reason I know its called a Rug-Boni by the way is that it says RUG-BONI right on the side of it! draw a picture of it Kellen!

(And then follows a hand-drawn picture of the Rug-Boni.)

Seriuosly, have you ever seen exclamation marks convey a personality so well? Murky's sheer ebullience makes him a highly entertaining read.


The historical fantasy Magic Marks The Spot by Caroline Carlson is another recent MG that I thoroughly enjoyed, featuring magic, hijinks, adventure and also plenty of deadpan humour.


(p. 52 - 53) "Actually," said Hilary, "I'm going to be a pirate."
"Oh, that's brilliant!" Claire hopped up and down again. "It sounds so thrilling. And you could meet all sorts of dashing sailors."
Hilary squirmed. The only sailor she knew particularly well was Oliver, and he was only dashing in the sense that whenever she was near him, she wished he would dash away as quickly as possible.

Here our protagonist's discomfort is paired with a contrast in thought to the other character's dialogue, along with a semi-pun for good measure, and the result is a flash of humour for the reader to enjoy.


How do you write your humour? Alternatively, what kind of humour in middle-grade do you enjoy the most?