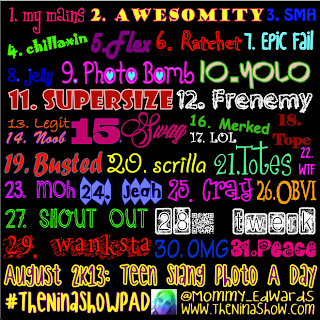 Since not everyone is lucky enough to be a middle school teacher, I thought I might use my monthly blog to pass on observations about today’s adolescents. I hope these thoughts can be of use to people who write about and for middle grade readers. I’ll add the obvious caveat that these are general principles based on my own experience. I’m sure exceptions exist.

I’m going to start with something that has become a pet peeve of mine: misuse of teen jargon (and I will use that term for any language unique to teens—slang, abbreviations, etc.).

I imagine we’ve all read books where the author tried to create an authentic middle grade voice by cramming contemporary jargon/slang/current teen lingo into a character’s mouth. It didn’t work. In fact, I think it sounds less authentic than having characters use no jargon at all.

Jargon is tricky. Kids do use it and authors want characters to sound authentic. But vernacular changes quickly, as do the cultural phenomena that inform the behavior and lived experience of young teens.

A term that is current when a book goes to the editor may be old news by the time the book is actually published. Unless you are writing historical fiction, this is probably something to avoid.

I know that sounds like common sense. I know this all sounds obvious. But based on more than a few things I’ve read, I think it’s a huge blind spot many authors have. I’ve certainly fallen into the trap and was saved only by a student reading my manuscript.

I don’t think it’s just me. I think all adults do this. When I accompany students to service projects or field trips, we interact with adults who don’t spend much time with kids. They almost always try to drop in some kind of cultural reference or slang term to be fun or cool. But it doesn’t work. It never works. However, I’m convinced most adults don’t realize just how off they are.

Here’s a suggestion: if a particular term was used in your youth, it’s probably hopelessly outdated now (same with musical groups or movies). In fact, if the last time you heard it on actual teen lips was more than a year ago, I’d be wary.  Go somewhere teens hang out and listen carefully.

Personally, I feel it’s better to not use jargon at all than it is to use outdated jargon.

This leads me to my next point, which is more subtle but possibly more important. Most kids I know don’t use jargon all that much in everyday conversation. I rarely hear them say anything like, “Okay, give me the 411/deets,” or whatever other term adults think teens use. I think you’re far more likely to hear, “No way! I wanna hear everything!”

Off the top of my head, I think they are most likely to use jargon as adjectives, for example, "That guy is so jacked!" My sense is that they use nouns and verbs less frequently.

When they do use jargon, most teens don’t use it incessantly. For example, I have heard many students use “epic,” “legit,” and even “dude.” I have not heard them use it in every sentence.

(As an aside, let me add that this is true for many specific demographic groups, not just teens. I live in a rural county in the South. The people I know sound almost nothing like the clichés I often read or see in movies. For example, and this may be shocking, I have never been called “Sugar.” Not even by middle-aged waitresses at diners. But I digress.)

The main thing to remembers is that adolescents do use lingo sometimes, but in everyday settings, it’s generally the lesser part of their vocabulary. As authors, we might think of it as pepper: a useful ingredient to be employed with caution.

The adolescents I hear are more likely to use regular English, but in informal, even sloppy ways. For example, “gotta” instead of “got to.” They often use the shortest word that will work, have simple syntax, and speak with a different cadence, inflection and tempo than adults.

Jargon provides rich and tempting opportunities for authorial mistakes. I asked some students to read an early draft of my book, The Kindling. Among other things, I asked them to critique the voice and dialogue of the characters and tell me if they sounded like real teenagers. I was intrigued that the times they felt the voices were most authentic was when the characters used no teen jargon. The times they felt the voices were least realistic were when I employed jargon.

Looking back, I realize that this was because I had inadvertently descended into caricature. The jargon, while currently in use, was disproportionate and excessive. It turned my characters into clichés and was too obvious, obscuring more nuanced bits of characterization. Luckily, my students caught it.

There's an element of common sense here. If you don't speak French, be very cautious with having your characters speak French. Do a little research and at least have a native speaker look over your work.

Perhaps the most important thing to remember is that characters ought to seem like dimensional human beings. Jargon, like other external elements, ought to be a finishing touch, not the main component.

Note: The one exception to all I’ve said is that when they text or interact on social media, many teens do use a lot of abbreviations and lingo. However, I think that’s more about ease and convenience than it is reflective of their real mode of speech.

Thanks for stopping by today! I'll let you all get back to your NaNo goals.