The Creativity Killers that Keep the Idea Box Empty, and How to Fill it Back Up 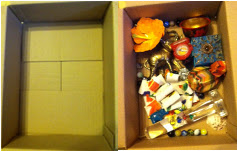 Have you ever faced a blank computer screen and wondered how to think up a story that's new and interesting? I think most of us have, especially after writing more than one story. The first one is easy-we wouldn't have started writing at all if not for the first idea. It's what comes after that may be a struggle. There are obvious creativity killers, and some of those we don’t have much control over. Working long or hard hours to earn a living wage is probably at the top of the list, and the most common issue with writers. Family responsibilities or health problems are another. But sometimes even when you do have time to write, the ideas just aren’t there. I’m not talking about writer’s block, but more the way to finish a story, or even come up with one to begin with. These days I usually don’t have any trouble with ideas, because I’ve learned the best ways to generate them, but it’s taken me a little longer to figure out the best way to overcome challenges to figuring out the creative details necessary to make a plot idea into a whole story.

I know in talking to other writers, some really struggle with generating basic plot ideas. There has been quite a bit of scientific research done on creativity, especially in business environments and while much of it doesn’t translate to a writer’s creativity, some bits of it are useful. In a business environment, the lack of time to free think is a huge block to creativity. If much of a worker’s day is taken up with paperwork or talking on the phone or meetings, and the rest of the time is taken up with the actual job, there’s no time for the brain to generate new ideas. This relates to writers when we start to evaluate the value of time spent on social media. I love a writer’s forum I belong to, and I enjoy Facebook and Twitter, but I’ve realized the use of them should be more a treat to myself to relax after I’ve accomplished either some writing or some planning about what I’m going to write.

There is pressure for a writer to spend time on social media to build a “brand” or just to remind people they exist, but if you have trouble coming up with an idea or carrying a story through to the end, then saying no to social media to give yourself time to think might be the most benefit to you in the long run.

I’ve heard a writer say she can’t spend the time to think because it’s a waste of writing time. I know the pressure to write when you only have a few brief hours for it can seem too valuable to give up, but if you spend that time struggling to figure out what happens next in a story, eking out a few hundred words, it might help to step away and do something totally different. Take the pressure off your brain and it may reward you.
I don’t get my best ideas sitting in front of my computer. I have one odd way that helps me. I go to a library and roam around the nonfiction section, especially the travel, art and craft, and history sections. If you are a visual person, like I am, looking at pictures in books does wonders for my creativity.

Walking around an unfamiliar part of my city is something else I've done that's helped, especially when it involves observing the people there. Even concentrating on observing people or places while you are doing your regular errands can help. If you can get away for a day trip, there is a wealth of inspiration out there. A few months ago I knew I needed to be somewhere new and different, but couldn't just take off on an exotic trip, so I found a place to go a few hours away. It was an annual pawpaw festival. If you don't know what a pawpaw is, it's a fruit native to the U.S., and Ohio has a region where they grow well. But that's not important to my point here. The festival turned out to have a lot more going on besides fruit. I watched a demonstration of people from the Society for Creative Anachronism (I don't know why they were at the pawpaw festival, but I'm glad they were.) That gave me a terrific idea for a story, and made the drive and the time it took worth it.