PROMOTING A BOOK OUTSIDE THE BOX!

Would you go to a book signing if the author handed out free cookies?  I would.  I’d drive an hour for free cookies. I’d endure sleet, snow, possibly a tornado, as long as it was off in the distance.  When a friend of mine told me she went to a book signing for a mystery writer and the author handed out homemade cookies to everyone in the bookstore, I was deeply impressed by the author’s promotional savvy, along with her obvious baking skills.  This novelist could make a mean chocolate chip cookie and she used her strengths.  She merged them.  It dawned on me that in order to promote a book you must be just as creative as you would be when writing a story.  But it’s a different kind of creativity.  You must tap into your other strengths and passions.  It doesn’t matter what you don’t do well.  (I’m not the world’s greatest Facebook contributor.)  But what do you excel at?  For me, along with writing children’s books, I take a lot of dance classes, jazz and hip hop.  I’ve developed a knack for moving like a robot.  So I began to create a new persona for myself that kids might get a kick out of.  James Mihaley, the world’s first robot author.  I called myself The JimBot! 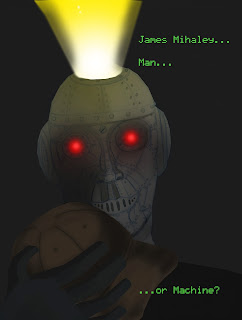 Here's an image of me feeding a deer created by a brilliant artist named Austin Jones. 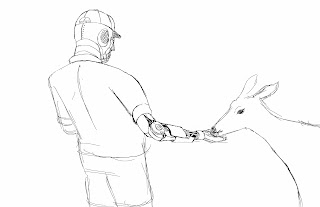 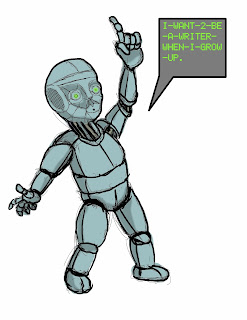 All this began because someone told me about a writer who baked cookies.  It’s amazing what a good cookie can do to you.

Here’s a photo of me with my mother. 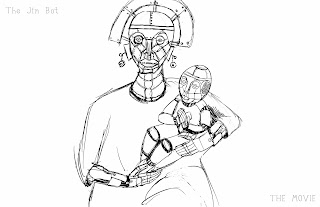 I live in Los Angeles, have some friends in the film business and decided to make a movie about it.  Is ‘You Can’t Have My Planet But Take My Brother, Please’ the first book in history written by a robot?  Is Macmillan secretly hiring robots to write MG novels? This is not a thirty second trailer but an actual six-minute short film.   It was directed by one of the guys who edited Elysium, the Matt Damon Sci-Fi thriller that just came out.  Some of the best footage in our little movie was shot by a cameraman who worked on ‘Breaking Bad’.  We made the film for $1.98 but because there were so many talented people involved it’s quite remarkable.

Here’s the link below for JIMBOT, THE MOVIE on YouTube.  I hope you enjoy it!  God bless cookies.